Jay Sankey: Biography, Net Worth, inside deception, Penn and Teller

Jay Sankey is a professional magician who has been perfecting his craft for over 30 years now. In that time, he has gained a lot of acclaim and credit for all his contributions to the world of magic.

He was born in Montreal Canada in 1963 making him 54 years. Apart from being a quality magician, Sankey is also a standup comedian. He has excelled a lot in standup comedy that he has even authored a book on the same.

He is also an inventor of magic, a great author, and a teacher. Jay Sankey has also been known to offer Consultancy services to other top magicians and illusionists all around the world. He is, therefore, one of the most reliable authorities when it comes to magic. Jay has also performed on many stages in the world, further sharpening his skills.

Jay started performing tricks at a very early stage. His interest in illusions and magic had already grown by the time he was 11 years. He acquired his magic set at the age of 11 and started practicing and spending countless hours perfecting the basic tricks the set offered. By the time Jay Sankey was 18 years old, he was so good at performing different types of magical tricks that he started performing for large audiences and crowds. He even went to different places to lecture about the mysteries of magic and how to get the best out of tricks. He was a truly talented magician with an unbelievable sleight of hand ability that took him all around the world. He could also perform huge stunts dazzling crowds everywhere he went. He was also a great mentalist who would be frequently confused with psychic.

Jay started his magic career back in the 80’s and he has never looked back since then. He has been credited with the record of ‘creation of the most tricks by any magician’ – a record which still stands even today. Sankey has created over 700 magical tricks all on his own which is no easy fete because most magicians copy or emulate tricks that were created by about 5% of the other magicians.

What’s surprising about Jay Sankey is that despite him traversing the globe, performing and lecturing on magic, he was still able to graduate from college with honors in Philosophy and Psychology. His professionalism has not come the easy way because he is credited with a lot of performances which he started at a very young age. As Sankey would rightly put it “no one can become a professional without performance.” He has performed his magic in film shows, banquets, private shows and high profile corporate giants like Jaguar motors, Coca-cola, Honda, Chrysler and even Mc Donald’s.

Jay Sankey also has a magic kids show known as ‘Spellz’ which he started to encourage kids to love magical tricks and illusions. He even hosted a couple of the episodes in the show just for authenticity purposes. The show has been a great success over the years.

Even though Jay has an already impressive resume, there is still more. He is an amazing standup comedian who really knows how to crack ribs. He has a fabulous book on standup comedy which has been widely regarded as the leading authority or Bible for all standup comedians –amateurs and professionals. Sankey has even appeared on the famous comedy show ‘Just for laughs’ where he seriously made people laugh their hats off.

Sankey is also an accomplished writer with bestselling books that have influenced a lot of people. He has written, ‘Zen and the art of the Monologue’ and ‘Zen and the art of Standup Comedy.’ Both books especially the latter have been hugely successful in the market.

Sankey lives a quiet life with his family in Toronto, Canada. He married his wife Lisa, and they are blessed with two kids Madelaine and Mason.

Inside Deception is a one of a kind Brainchild that was made by Jay Sankey. It is an ingenious website that he owns where he is able to share his experience and magic with all categories of magicians, from the amateurs to real professionals, anyone who is a magic enthusiast can really sharpen their skills here under the guidance of this great teacher. The site has numerous magic tricks and tutorials. 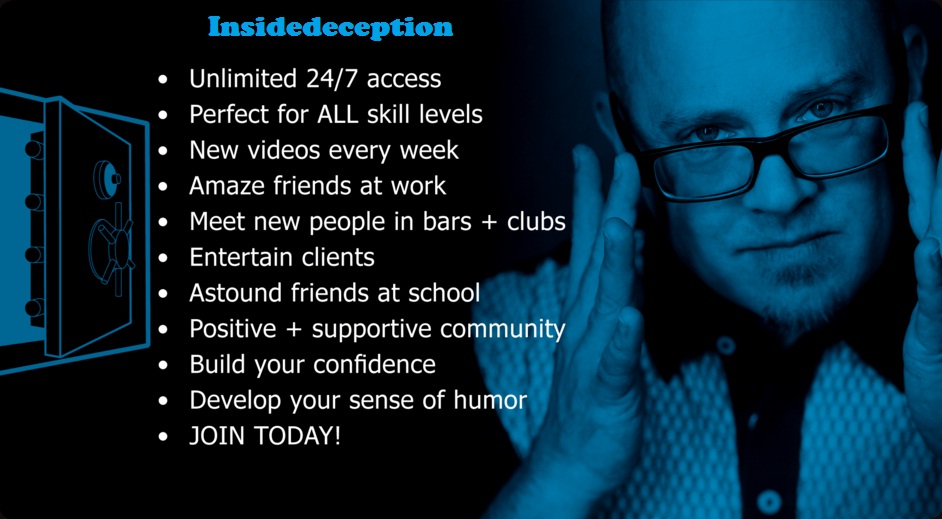 Some of the magic tricks are a product of Jay e.g. coin deception tricks, mentalism tricks, and numerous card tricks. There are also various categories in the site according to different interests and magical powers. Categories in the site includes deconstructing miracles, sleight of hand lounge, The art of promotion, workshop training, making contact and even a category known as WTF. All these categories are aimed at helping the visitor to feel right at home and to foster guidance, professionalism, and support.

There is also a section on the site where you can get expert advice on how to build your confidence, market yourself, and how to become a great standup comedian. It is a professionally run site that is sure to get the best out of you magically speaking. There are great reviews of the site from various magicians who hail it as a great help during various stages of their careers.

Sankey is an accomplished writer who has authored some critically acclaimed books which have gone on to revolutionize the magic and entertainment world. He has authored the ‘Zen and the art of Standup Comedy’ which is an invaluable book for all standup comedians. Most professional and amateur standup comedians regard this book as the Bible of all Standup Comedy. It has all the do‘s and don’ts of Standup comedy and it has passed through the hands of most accomplished comedians. In this book, you will get to learn how you can get fresh ideas for your comedy which needs to constantly change to stay relevant. You will also get other material that you just can’t get anywhere else. You will learn how to have correct timing, delivery, how to effectively promote your act so that people will know you, and critically, how to effectively deliver your content in an effective and convincing manner. It has been widely regarded as the most detailed, most comprehensive and most effective book on all standup comedy material. Jay Sankey obtained material for this book from his many years of standup comedy and from his immense exposure and experience as a performer.

Apart from having a site that is solely dedicated to magic –Inside Deception- Sankey also has a YouTube Channel that is dedicated to magic. The channel is known as SankeyMagic and it is a big hit in magic quarters. It has an impressive subscriber base of over 200000 and with good reason. It has loads and loads of magical videos and tutorials ranging from Sankey’s own tricks to a myriad of other tricks by different artists. There are card tricks, mind tricks, street tricks and a host of different kinds of illusions. And of course, Sankey is always there to guide and give advice on any tricks and illusions. You will also get Jay’s portfolio and the many tricks he has performed all around the world for reference and tutorials.

Jay Sankey and Penn and Teller

Sankey once claimed that he fooled Pen and Teller with his tricks when he appeared on their show. Although he did not tell the duo to their faces when he appeared on the show- because of apparent respect and admiration for the two –it seems likely that Sankey did in fact, fool the duo. He performed a couple of tricks on the show, which Penn and Teller were eager to decode. Problem is, Sankey didn’t actually perform the tricks like the duo explained but used totally different trickery and thus fooled the great magicians.

In this trick, he let a straw go through the middle of a straw and folded the straw. He then unbelievably removed the ring without breaking the straw anywhere. He was even able to reinsert the ring back again without breaking the straw. Even though the trick was available in the original video, it was edited from the final video that was distributed to audiences for the simple reason that Penn and Teller were completely unable to decode the trick.

In this trick, Jay Sankey, stepped forward and produced and deck, of cards. He then proceeded forward and made a card from the deck levitate out of the box. Penn and Teller would later describe the trick by saying that he used a mechanical deck or a string. They were, however, wrong because Sankey claimed that he used another method to perform the trick. He says that he made a small hole at the back of the deck to be able to levitate the card.

Apart from these two tricks, he also performed other card tricks that fooled the magicians. He fooled them with the tearing bill card because he actually used sounds from his mouth to magnify the effect. Also, Sankey claimed that he did not use the elbow trick to tear and restore cards that he tore.