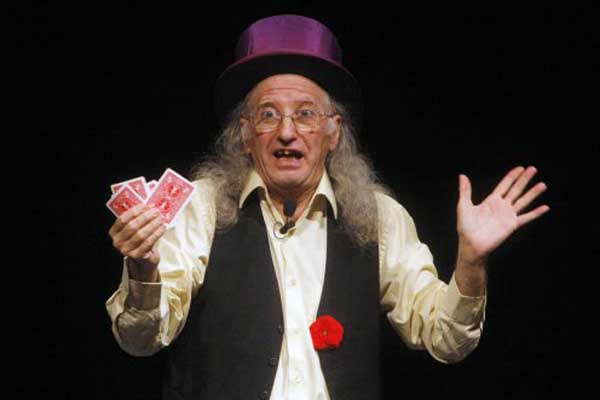 Juan Tamariz – Martel Negrón, known professionally as Juan Tamariz or just simply Tamariz, is an experienced Spanish magician born in 1942 in Spain’s capital, Madrid. The magician specialized mainly in card and close-up magic, and has always been known for adding humor in all of his acts. Many times he has been recognized as one of the best magicians of his specialty. He has even been recognized as ‘the best current magician’ in general. This was especially after the magician was awarded the First World Prize in card magic in Paris, 1973. Juan Tamariz is well respected by his peers as an authority in the field of misdirection. 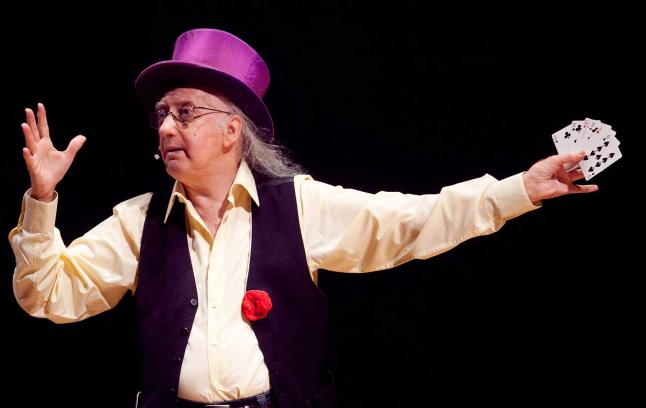 Juan Tamariz has performed his amazing acts for the public of all Spain. The magician did not stop only at that, and has also performed in cities all around the globe, such as New York, London, Paris, Chicago, Bogotá, Tokyo, Cairo or Santiago de Chile. The Spanish magician has also published a great number of books on the subject of magic and even some magic reveal titles. He is internationally considered to be one of the most important writers, fact owed to his magic theory writings.

Juan Tamariz was born on the 18th of October 1942 in the family of Julio Tamariz – Martel Fabre from Écija and María del Consuelo Negrónde las Cuevas, originally from Algeciras. Young Juan’s first contact with magic was at the young age of four. His father took him at a theatre to watch a magic show, and it was at that moment that Juan Tamariz decided to start learning the art of magic. He then received on ‘dia de Reyes’ a magic kit as a gift and started taking his first steps into the world of magic. In addition to that, he started going whenever he could at the circus to study the magicians. He also went at his older brothers’ schools to see magician Marlow’s shows, trying to understand how every trick is done.

As soon as he thought that he had learned enough by trial and error, he started borrowing his first books of magic. Also, he started performing magic tricks in front of bigger and bigger audiences and started preparing to join the Spanish Society of Illusionism. He first tried to join the society at the age of 16, but was rejected, as the minimum age to join was 20. Nevertheless, Tamariz returned when he was 18 and applied for the membership exam. The young magician astonished the examinators and was granted membership without having to meet the minimum age requirement.

Soon after joining the Society, Tamariz met Juan Anton. Together, they created the act known as ‘Los Mancos’, translated as ‘The lame’. In this act, Tamariz and Anton both performed while only using one hand. This was also the period when Tamariz met his teacher, Arturo de Ascanio, as well as other skilled magicians. He also began acting as a clown and puppeteer, roles that gave him the chance to improve his comedic skills.

Juan Tamariz studied for a bachelor’s degree in physical sciences, but only for four years out of the five required. He gave up on this mainly because his real interest was in the cinema. He then joined film school, where he met film directors and screenwriters José Luis García Sánchez and Miguel Hermoso. Due to a high number of strikes that took place in it, the school shut down in 1970. Unfortunately for Juan Tamariz, the school closing caused him not to graduate as a film director. During the time that he studied film, Tamariz directed two short films: ‘Muerte S.A.’ in 1967 and ‘El espíritu’, two years after that. Tamariz also wrote the script for ‘El espíritu’, movie which has brought on screen, for the first time, Spanish actress Carmen Maura. After the closing of the school, Tamariz, along with other classmates, founded the Magic School of Madrid.

Even at the age of 75, Juan Tamariz continues to perform numerous acts of magic and comedy in congresses around the world, especially in Spain, where he appears in diverse programs and television events on magic. Tamariz has four children: Mónica, who has a Ph.D in linguistics at the University of Edinburgh; Ana, director of the Magic School of Madrid, founded by Tamariz himself; Alicia, who is a musician, and Juan Diego. Tamariz married Consuela Lorgia from Colombia in 2008, who is also a professional magician.

After winning several national awards and getting the second place in the FISM with ‘Los Mancos’, Amariz’s definitive leap into glory was the First World Prize awarded to him in Paris in 1973. The act that brought him this award was a mixture of card manipulation and illusion. This act, known as ‘The act of Paris’, included transformation, vanishing, and production, all accompanied by Tamariz’s great humor and his harmonica playing skill. Arturo de Ascanio, who is considered the father of Spanish card magic, stated that Tamariz’s performance was the best magic act he had seen in his life.

The renowned Canadian magician Dai Vernon, also known as The Professor, claimed that in more than eighty years of magic, no one had deceived him as Tamariz did. Tamariz’s card tricks also impressed Ricky Jay, the well-known American master of sleight of hand and card tricks. Jay said in an interview that Juan Tamariz is one of the magicians who will surely be remembered in the future.

During his career, Juan Tamariz has had tours and conferences with magic enthusiasts all around Europe, America and Asia. His deep knowledge of the theory and history of magic has even made people describe Tamariz as a ‘walking encyclopedia’.

In addition to writing circulars for the Magic School of Madrid, Tamariz has published articles in several magazines. Throughout his career, he has written several books, which have been translated into English, French, Italian and German. Among his works, there is ‘Monedas, monedas y… monedas’, a 1969 book that presents a coin routine for magicians. In 1975, Tamariz published ‘Magia en el bar’, which included magic effects done with common things from bars or restaurants. Two years later, he published ‘Magicolor’, which focuses on magic effects that involve changing of colors. In 1987 he publishes ‘La via mágica’, a book in which he presents his theory on false leads. One year later, he publishes ‘Los Cincos puntos mágicos’, book based on one of his lectures on the presentation of magic.

Juan Tamariz has also founded the publishing company known as Frakson, dedicated to the publication of titles related to the art of illusionism. Tamariz’s magic is now studied in the faculties of Fine Arts of the United States.