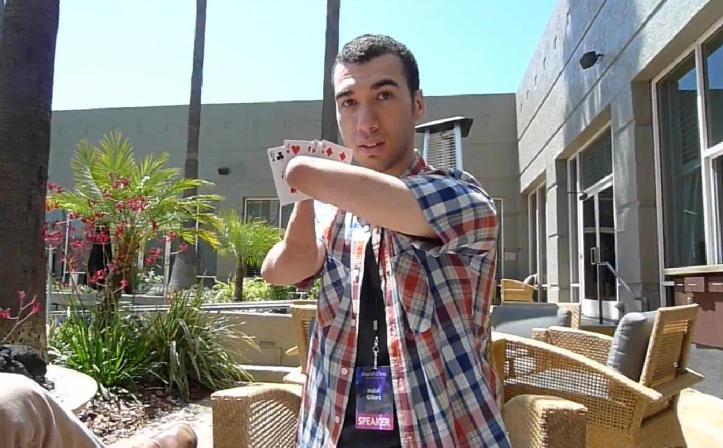 Mahdi Gilbert is a professional Canadian magician/ illusion. He has specialized in close-up magic tricks less to say the card tricks. Short to say that Gilbert is sleight of hand, and learning magic for him was very difficult since all the book that were there were written for people who had hands.

His Journey to being a Magician

As a kid, people told him that he could not do any magic tricks because of physical stature but that never made Mahdi give up. He went on to practice on his own while he slowly reinvented magic tricks made by others with hands so that they could work for him. It was always difficult for Mahdi, at the beginning as he was starting to try and do the card tricks, to lift up the cards. To solve this Mahdi had to stay up late into the night just to practice the card tricks as he made up his own magic tricks. He always believed that if he became a magician he would be able to do anything and nothing, not even his lack of hands would prevent him from becoming one. This made him become self-sufficient for himself in life.

Mahdi Gilbert was able to appear on Penn&Teller; Fool Us. He performed the oil and water card trick which fooled Penn and Teller. This landed him a grand trip to go to Las Vegas and perform at Penn and Teller’s Grand opening.

Mahdi has managed to appear on our Magic which is a talk show by R. Paul Wilson. There he has been praised for doing the impossible which is doing magic tricks while being sleight of hand and that he also invents his own magic tricks, which makes him special since it is very unique in magic if not rare.

Gilbert has also assisted Ricky Jay in the writing of the book The Greatest German Living which is about a magician called, Matthias Buchinger, also a magician was born without hands and he also did not have legs.