Dai Vernon: The magician Who Performed a Magic Trick That Fooled Houdini

Dai Vernon was born David Frederick WingfieldVerner on June 11th ,1894. He was born in Canada. He was a legendary performer, illusionist and accomplished magician who scaled the heights of magical performance and conquered it. He was blessed with an absolutely amazing sleight of hand ability which earned him the respect of most if not all of his peers and fellow magicians. He was highly respected and revered in the magic world because he had finally matured his craft to perfection. He also mentored and taught other upcoming magicians who followed and relied heavily on his great influence and artistry. Dai Vernon is also Famous for the trick that fooled Houdini.f 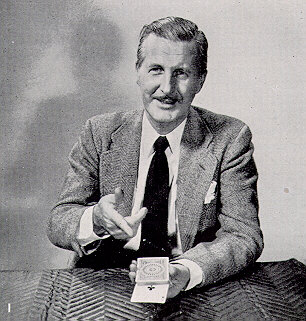 Vernon came from a deeply magical family and it is from here, that he first learned how to perform simple tricks. It is from his home that his desire for magic was fuelled. He came face to face with magic at age 7 and it was his own father who influenced him. In a famous interview, he stated that as soon as he realized what magic was at age 7, he realized that he had wasted the first six years of his life. His father had a full-time government job but was still able to perform tricks and attain the rank of an amateur magician. In the late 19th century, performance magic was still not regarded highly and it was quite improbable to find anyone who lived entirely off magic proceeds. It is for this reason, those professional magicians were very few and far fetched all over the world. So even though Vernon’s passion was to be a magician, he still had to attend school and ‘make something of his life’. He attended the Royal Military College of Canada where he studied Mechanical Engineering. After sometime Dai Vernon decided to move to New York USA.

Vernon started paying attention to Magic at the tender age of 7 years thanks to his father who happened to be an amateur magician at the time. He got his first magic guide book at this time called ‘The Expert at the Card Table’ by S.W Erdnace. It is this book that lay his foundations in the magical world by influencing him and teaching him the basics of the trade. He also credited the book as a huge influence of his acts and positively reviewed the author for writing in a detailed and systematic way. By the age of 13 years, Vernon had completely mastered and absorbed all the tricks that were in the book and even other tricks that were not in the book. During this period, another famous magician was also trying to learn the ropes of the trade. His name was Cliff Green the legendary magician and illusionist. By chance, they happened to meet at a magical event. When they met, Cliff appeared to taunt him when he asked Dai, what kind of tricks he was good at. Vernon’s reply was a genius; he performed for Cliff a very amazing card trick. He asked Green to name a card, any card that he could think of. When Cliff named his card, Vernon went ahead and produced a deck of cards from his pocket. He then opened the deck, held the stack of cards in his hands, and without shuffling, turned over the first card on the deck. To Cliff’s shock, it was the same card that he had named. He was left bewildered.

When he was in New York, he used to work at the Clyde Powers Magic Shop where he continued perfecting his trade and polishing his act. All this time, he still referred to himself as David but one day his name would change to Dai. Here’s how it happened; a local newspaper once misspelled his name where instead of writing David, the Newspaper wrote Dai and people started referring to him as Dai instead of David. There was also a famous ice skater at the time who was known as Vernon and people always mistook him for Vernon the ice skater. This is how the two names stuck on him and from then on, he was called Dai Vernon.

Vernon was a master of the sleight of hand card tricks and by the time he was in New York, he had perfected this skill. He was so good at sleight of hand tricks that people eventually started referring to him as the ‘Professor’ a title which he held and took to most of his shows.

Vernon, like many of the magicians at the time –and even today – never believed that there was a blend of magic that involved supernatural powers. He always believed that magic acts were tricks, performances, and illusions and that anyone who lied to people that he had some sort of psychic or supernatural powers was a fraud and a cheat. He, therefore, traveled extensively looking for frauds and people who pretended to use the supernatural and paranormal to defraud people. He always wanted to expose such kinds of people.

He was also extensively interested in other sleights of hand experts and he always wanted to compare himself with others to further perfect his skills. He developed the card techniques that were later used by some great magicians like Fredrick Brave and Jean Hugard. He was however never given the credit he deserved for creating and developing these tricks.

Dai is also credited with most of the close-up effects that we see today in magic. Previously there were no close-up effects in magic because magicians preferred their acts to be far away for risk of exposure. Most of the close-up magic effects with coins and cards are attributed to Vernon. He also single-handedly came up with the cups and balls routine that has gone on to dazzle fans around the world. The amazing symphony of rings act or the six-ring routine act was also invented and developed by Dai Vernon.

He spent the last 30 years of his life performing magic at the Magic Castle in LA California. He was responsible for mentoring some big names in the industry like PerciDiaconis, Doug Henning, and Ricky Jay.

At this particular time in history, there was a boom in the magic industry. Many top performers had come up to rival Dai and this was a good thing because it put magic, performance on the map. None was better than the legendary master magician –Harry Houdini. Both performers found themselves in the same error and it was just a matter of time before the two greats bumped into each other. When they finally got to meet, it was an epic encounter. Houdini was an established and accomplished performer who was already a living legend. Houdini had famously claimed that no magician alive could fool him with a card trick after three consecutive performance in front of him. Well, Dai thought otherwise and he was set on proving that the great Houdini could be fooled. He expertly applied his sleight of hand abilities on a card trick that really FOOLED HOUDINI. He produced a deck of cards and asked Houdini to pick the first card on the top of the deck. Houdini had to make sure that Dai did not have a look at the card. He then asked Houdini to place the card second from the first card at the top. Dai then asked Houdini to reveal the first card on the Deck. To Houdini’s surprise, it was the same card that he had earlier picked. He asked Dai to perform the trick a second and a third time, but he still couldn’t figure it out. After the seventh attempt, Houdini’s wife had to literally pull her husband from the scene because she realized that Houdini would never be able to figure out the trick. Dai had single-handedly fooled one of the biggest magicians of all time.

The trick That fooled Houdini Revealed

Vernon was also an accomplished author and he wrote very many books about magic in an effort to create awareness and interest in magical tricks. He has authored over ten books e.g. ‘The Dai Vernon’s Book of Magic’, ‘Ultimate Secrets of Card Magic’ ‘Malini and his Magic’ and many other books.

Dai Vernon passed away on August 21st ,1992 at Ramona Sandiego in Carlfonia. He had requested that upon his death he should be cremated and his ashes kept at Magic Castle. This is exactly what happened upon his death.