Keen aviator Harry Houdini, born in Budapest as Erik Weisz, has put his mark on our world as a legendary escapologist and magician. The amazing stunt performer is mostly known for his unbelievable escape acts. He first made himself noticed in vaudeville in the US. From chains, straitjackets, ropes, handcuffs and even being buried alive, Houdini impressed everyone that laid eyes upon him. Of course, as any successful man, especially in his field of expertise, there were many who tried to put his name to shame, by claiming that his stunts and escapes were fake. The truth about harry Houdini’s death still remains a mystery.

At first, Houdini’s magic career was not very successful. He started with traditional card tricks, and for a while, he was calling himself“King of Cards”. He also worked for a circus as “The Wild Man” and only after did he start experimenting with escape acts. Risking his life many times, Houdini managed to pull off incredible acts, such as being buried alive. The first time he performed this stunt was in 1915 when he was buried in six feet deep pit, without even a casket. While trying to dig his way up, the weight of the earth, which he described as “killing”, made him panic and, by the time his hand reached the surface, he fell unconscious and had to be pulled out by his assistants. Presenting himself as the scourge of fake spiritualists, Houdini once performed the buried alive stunt with the objective to expose Rahman Bey. After being locked in a sealed casket for 60 minutes, the Egyptian performer claimed that he had used supernatural powers to survive, but Houdini did not buy it. In 1926, he remained locked in a casket, underwater, for 90 minutes, claiming that the secret was not any God-given gift, but only controlled breathing. 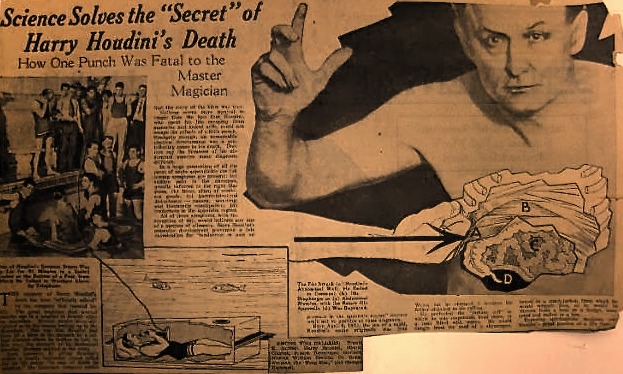 The legendary Harry Houdini died in rather mysterious circumstances on Halloween, in 1926. Still widely known for being the fittest man alive, who could definitely take a few punches, officially, Houdini died from an abdominal infection called peritonitis, caused by a ruptured appendix. The cause of this is quite unknown, but suspicion fell upon Jocelyn Gordon Whitehead. Whitehead was a student at McGill University in Montreal, Canada, and his connection with the illusionist is unknown. Nine days before Houdini’s death, he challenged Houdini to withstand several punches to his abdomen, knowing that this was a trick that Houdini often performed. Immediately after the illusionist’s death, people began suspecting that he was murdered. Although there were three students in Houdini’s dressing room that night, the main suspect was Whitehead. The students met Houdini after a lecture given by him at the McGill union. The lecture was about fraudulent spiritualists and the tricks they use. According to the other students who were in the room that night, Whitehead dealt several excessively heavy blows to Houdini’s abdomen. Houdini did not have time to prepare himself for the attack, as he was lying on a couch at that moment.

There was no autopsy carried out on Houdini’s body, and nothing was done to establish whether his encounter with Whitehead had caused or even only contributed to his fatal infection. Furthermore, Bess Houdini, the magician’s wife, and her niece gave different statements, which has only put a bigger question mark over the existing suspicions surrounding the event.  In March 2007, Houdini’s family decided to exhume his body, suspecting that the escapologist might had been poisoned. Later it has been revealed that the required papers for the exhumation were never actually filed.

However, three years later, a medical review found that the physical trauma the punches have caused can not be linked with the ruptured appendix that ultimately killed Houdini at the age of 52. Therefore, there is sufficient scientific doubt that J. Gordon Whitehead is the man who killed Houdini, so the mystery of Harry Houdini’s death goes on.

Although the legend of Harry Houdini continues lives on till this day and will so over the times to come, certain accounts of his life have been totally misrepresented and misconceived by the public and Read more…