Alan Alan The Escapologist and a Magician: Biography 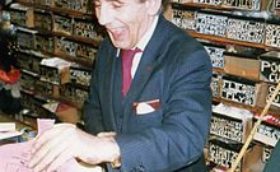 Alan Alan born, Alan Rabinowitz was an English Escapologist and a magician/illusionist. He was born on November 1926 in London, England. He created magic tricks which are now being used by magicians all over the world. He was even honored by the Magic Circus which is in Britain.

Alan came into the spotlight for performing for the media in stunts that shook the world. He made headlines once when one of his media staged performances of him being buried alive almost went wrong which really must have shaken him but he never gave up he went on to do the burning-rope straitjacket escape which he has been credited with devising it himself.

The life of Alan Alan the escapologist

He was born on 20th November 1926 in London which is in England. As a child, one of the famous magicians who made him fall in love with and become a magician was Dante the Magician who was a Danish showman. During his teenage years, he decided to create his own magic and escape acts which later led him to be taken on tour by Reggie Dennis who in fact gave him the nickname Alan Alan.

In the late fifties, he was the one who managed Tommy Cooper’s magic shop in London. Later own he became the proprietor of his own shop.

Later own Alan Alan the escapologist mentored some magicians. He was also Michael Vincent’s mentor, whom later came to become The Magic Circle’s magician of the year.

Apart from reinventing Houdini’s and other magicians magic tricks he also created his own magic tricks including the close-up magic trick called the decimated coin in which a coin seems to shatter into pieces, sharpshooter effect in which a gunshot seems to shoot one card which has been chosen in a card pack. He really was a legend to the extent that Davis Copperfield said that he had idolized him ever since he was a little boy.

His standing and influence in the world of magic was well received and he was recognized in 2006. This is when the Magic Circle chose him to receive the Maskelyne Award for his services and contributions to the British Magic. 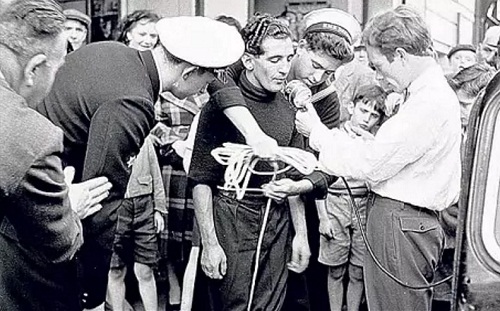 alan alan the escapologist : Getting ready for his Magic Trick.

The burning rope straitjacket escape was an escape trick whereby he would be tied upside down using a rope while he is hanging feet above the ground wearing a straitjacket. Then the rope would be lit and he would only have a few minutes to let himself loose and escape before the rope burns out. This act was a complete reinvention of a routine that had been pioneered by Houdini. Risky as it was he had almost gotten himself killed including one time when he fell off of the rope and fell on the stage.Before doing the stunt he once claimed that he would free himself faster than it took to tie him on the rope.Even though this was risky for him still he heightened the dangers more and more on every performance.

He even did a performance whereby he had handcuffs on him and he was left dangling above a cage of lions and even to make it more dangerous and scaring, above a row of sharp swords.

For all that matters, it is that he got his fame because the stunts he did were staged and performed for the media.

He has been hosted by many TV shows including the Magic of David Copperfield. Ironic thing is that while he was training the inmates he once decided to teach them  how to escape from handcuffs

Well sorry to say he unfortunately passed on on the 4th of July in 2014. It will be worth it to say that his life was well lived having in mind the fact that he had and he still is inspiring many to join the magic industry. During his life he was known as the British Houdini.